During 2010, 206 community mental health centers (CMHC) received an estimated $218.6 million for providing partial hospitalization program services to approximately 25,000 Medicare beneficiaries. Arrests by Medicare Fraud Strike Forces indicate that some parts of the country have a higher prevalence of CMHC fraud, including areas in Florida, Louisiana, and Texas. A recent OIG study found that approximately half of CMHCs exhibited questionable billing in 2010, most of which were in Florida, Louisiana, and Texas. Other OIG studies have found problems with CMS's oversight of contractors.

We collected information and documentation from CMS, Medicare Administrative Contractors (MAC), and Zone Program Integrity Contractors (ZPIC) regarding activities to detect and deter fraudulent CMHC billing in 2010. We also analyzed Medicare claims data from the National Claims History Outpatient File to determine the extent to which Medicare paid CMHCs subject to payment suspensions, revocations, or selected autodeny edits in 2010. 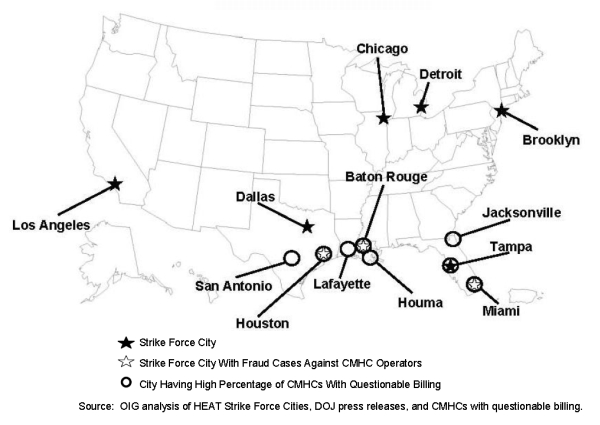 One of nine MACs we reviewed performed activities to detect and deter CMHC fraud in 2010, and most of these were part of a CMS-led special project. Activities to detect and deter CMHC fraud varied substantially among ZPICs in 2010, with one ZPIC performing almost all such activities. Most of these activities were part of the same CMS-led special project. Other MACs and ZPICs performed minimal activities to detect and deter fraudulent CMHC billing, despite having jurisdiction over fraud-prone areas. Additionally, Medicare paid CMHCs that did not comply with its requirements after their revocations were effective and while their revocations were being approved. Medicare also could have prevented payments to potentially fraudulent CMHCs by consistently applying an autodeny edit across Florida CMHCs.

We recommend that CMS (1) implement additional CMHC fraud mitigation activities in all fraud-prone areas, (2) develop a system to track revocation recommendations and improve revocation communication with contractors, (3) coordinate activities to deter CMHC fraud in Florida, and (4) follow up on payments made to CMHCs after the effective dates of their billing privilege revocations. CMS concurred with all four recommendations.