Since the Part D program went into effect in 2006, the Office of Inspector General (OIG) has had ongoing concerns about abuse and diversion of Part D drugs. In June 2015, OIG released a data brief, Questionable Billing and Geographic Hotspots Point to Potential Fraud and Abuse in Medicare Part D, which described trends in Part D spending and identified questionable billing by pharmacies. This data brief builds on that body of work. It updates information on spending for commonly abused opioids and provides data on the dramatic growth in spending for compounded drugs.

We based this data brief on an analysis of prescription drug event records from 2006 to 2015. 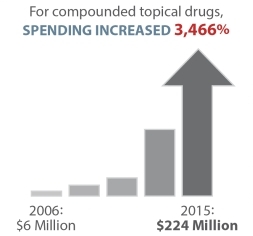 Ensuring the appropriate use of opioids and compounded drugs is critical to protecting the safety of Medicare beneficiaries and ensuring the integrity of the Medicare program. OIG will continue to conduct investigations and reviews to help address the ongoing problems created by opioid abuse and the emerging problems linked to compounded drugs. CMS has taken a number of steps to combat the problems associated with commonly abused opioids, such as identifying high-risk beneficiaries and outlier prescribers. However, it needs to take additional action, including fully implementing OIG's previous recommendations. CMS also needs to assess the implications of the compounded drug trends identified in this report and take action where needed to protect the integrity of the program.