This is Real - Episode 5: Consequences

In the final episode of This is Real, we wrap up the D.C. Takedown. Who was arrested and who pled guilty? How much money was recovered and who went to jail? Find out how these agents are fighting these fraud schemes today. 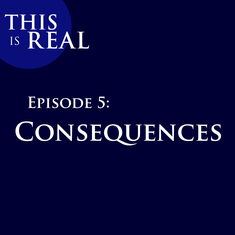 Previously on This is Real:

[Lewis: "I've never seen this in any of my other cases."

Thompson: "I may be the only person that's going to save my life before my cover team can get there."

Curtis: "You name it, they did it. At HHS, we do health care fraud. That's what we honed in on."]

Most of the defendants pled guilty, and combined, they were sentenced to over 22 years in jail with 14 months of home detention. The defendants were also ordered to pay over $120 million in fines, restitution, and forfeiture.

In the case of Florence Bikundi, who was the owner of Global Healthcare and fraudulently billed Medicaid over 80 million dollars, she was sentenced to 10 years in prison.

Her husband, Michael Bikundi, who was co-owner and also part of the scheme, was sentenced to seven years in prison.

Seven other defendants who worked at Global - including Bikundi's family members - were sentenced to a combined 24 months in prison.

Two defendants fled the country, and as of this recording are fugitives from justice and still on the run.

The judge in the case ordered the Bikundis to forfeit over $11 million from 76 different bank accounts.

The mansion was also seized, which was worth about a million dollars, along with $73,000 in cash that was found inside the house, and a handful of luxury vehicles worth over $400,000.

The judge imposed a forfeiture order of nearly $39 million in assets on both defendants.

And finally, the judge ordered the defendants to pay more than $80 million in restitution to D.C. Medicaid.

Agent Curtis felt he had closure when the final sentences were handed down.

The investigation took years to develop, and it involved hundreds of hours working the case, conducting surveillance, interviewing witnesses, and pouring through an endless amount of files.

But it was worth it - the investigation had strong results, with significant jail time for the Bikundis, as well as full restitution for the money stolen.

But there was a personal satisfaction for Agent Curtis, because his family made sacrifices during this lengthy investigation, too.

You see, Agent Curtis wasn't the original case agent for this investigation…

He agreed to pick up the case from an agent who went on maternity leave, even though he knew his wife would be…let's just say, less than thrilled. I'll let him explain.

[Curtis: "My wife wasn't the happiest camper in the world, because my wife was 7 months pregnant at the time. So I caught the case right at a critical point, and it was tough."

Todd: "Has your wife forgiven you yet?"

Curtis: "Uh, no, we still talk about it and when I told her that I would be doing a podcast about this particular case, she was like, 'Are you going to talk about how it wasn't your case to begin with?' So, yes."]

Such is the life of a special agent. They are dedicated and love the work they do.

They know they are making a difference: fighting health care fraud, putting criminals in jail, and most importantly, protecting our most vulnerable Americans - our seniors, people with disabilities, and under-privileged families.

As Agent Thompson would say:

[Thompson: "I don't think you'll find one agent who isn't passionate about, you know, their cases. And we don't want to let them go until someone has either paid restitution or what I like to tell folks is that we're selling jail time. You know? Or they're locked up."]

As for Agent Lewis's investigation, with help from Agent Rogers and his undercover work, her case resulted in 19 defendants pleading guilty, which included patient recruiters and personal care aides.

They were sentenced to a combined 18 months in jail, six months of home detention, and over 100 hours of community service. They were also ordered to pay over $300,000 in restitution, and fines.

[Lewis: I was relieved that the case ended. It was very complex, there were a lot of moving parts - but I was glad it brought awareness to the problem so that hopefully things will change and it will just improve the program."]

Because the defendants pled guilty, there was no trial, so Agent Rogers didn't have to testify about his undercover work.

That can be a mixed bag for an agent.

I mean it's good that the defendants pled and that Agent Rogers didn't have to reveal his true identity. But for the undercover agents? The big reveal can be a special moment.

When you walk into the courtroom, you make eye contact with the defendant, and he realizes for the first time who you really are.

Agent Thompson has seen those moments first-hand, and to her, the looks on their faces are priceless.

The sentencings represent the culmination of years of hard work. The 2014 D.C. Takedown was truly a team effort: with HHS OIG, the U.S. Attorneys' Office, the FBI, the D.C. Office of Inspector General, the Centers for Medicare and Medicaid Services, the D.C. Department of Health Care Finance, and many other agencies that played a vital part in the takedown.

The two Medicaid fraud cases described in this series occurred several years ago, but make no mistake about it, these schemes still exist, and they are evolving. They're becoming more elaborate, and more numerous.

The National Healthcare Anti-Fraud Association estimates that these crimes cost the nation about 68 billion dollars annually.

How is the agency combatting all this fraud?

This is a big bear to wrestle with.

[Thompson: "You have like, you know home health agencies popping up. We'd shut two down, three would pop up. So it's like, "How are they figuring this out?" And they're getting a lot savvier. But we stay on top of it by just communicating and staying in network with each other."]

For starters, agents closely track how these fraud schemes are evolving, and they work with other law enforcement agencies to discover new trends, and new methods used by criminals.

One way to do that? Data. Lots of data.

[Thompson: "You can do all kind of algorithms and different analysis to break down the data because data is very intricate and essential in a lot of our cases now."]

Identifying - and solving - potential billing problems requires a sophisticated understanding of how CMS processes the enormous number of claims it receives every day.

The agency works closely with CMS, as well as the state Medicaid agencies, to help them improve their systems, and weed out dishonest billers.

For example, after the 2014 D.C. takedown, the agency analyzed D.C. Medicaid's billing system for home health care services - an industry that was eating a multimillion dollar hole in the Medicaid fund because of rampant fraud.

One change they made? Limiting the number of hours that could be billed for personal care services in a given week.

Now that may seem minor, but when you're operating on a national scale, these changes can result in millions of dollars saved just by taking away one vulnerability that criminals can exploit.

The agency also has the legal authority to indict, arrest, and exclude wrong-doers from billing all federal health care programs.

The proof is in the pudding, as they say, and these agents are busy bakers.

During the past three years, their investigations have resulted in over $10 billion in expected recoveries - that's money expected to be returned back to Medicare and Medicaid.

In that time, more than 7,000 people have been excluded from participating in federal health care programs, and there have been nearly 5,000 criminal and civil actions.

The agency makes a lot of headway, but they don't do it alone.

You - the consumer, the honest health care worker, the patient - you have a big role in finding and preventing this fraud, too!

If someone approaches you and asks for your Medicare or Medicaid number, remember to Guard Your Card!

If the beneficiaries in these cases hadn't given out their information, this fraud may have never happened.

Health care fraud is a serious crime. One that Florence Bikundi and others involved in the D.C. Takedown paid the price on.

HHS-OIG special agents are here to protect the most vulnerable Americans and fight fraud in federal health care programs.

[Thompson: "We know we're serving a purpose. We know we're making a difference. Every time a bad guy gets sentenced for some type of Medicare/Medicaid fraud…it sends a message that's saying, 'Hey, if you try it we will come after you as well."]

I hope you enjoyed the first season of This is Real, and be on the lookout for more, compelling stories in future podcasts.

Until then, I'm Todd Silver, and thanks for listening.

This is Real is produced by the Department of Health and Human Services, Office of Inspector General. The agency reminds you that if you suspect fraud, waste, or abuse in any HHS programs including Medicaid or Medicare, report it to our Hotline at 800-447-8477, or 800-HHS-TIPS. Visit oig.hhs.gov for more information. Follow us on Twitter, like us on Facebook, and watch us on YouTube.