Farooq Al-Farooq, IT Project Manager, shares his personal and professional journey as an Electrician in the Navy, as well as his career in the civil service within the Office of Management and Policy at OIG.

Q: Tell us about your military career. (Why did you join the military?)

A: Even though both of my parents were former military and told me many stories, I wasn’t originally going to join. My dream was to go to a big college. Two factors drove me to choose the military. Firstly, my family had no money to send me to college, and New York State was “financially unable” to provide any scholarships the year I graduated. I won a NY State scholarship, but there was “no funding to provide any monetary award” to the scholarship. Secondly, I was approached by a local gang of which many of the members I grew up with and knew. I was offered a gun and a lot of money to work for them to sell drugs. I politely refused, handed the gun and money back saying I would think about it, and then knew I had to get out of New York. I signed up for the military that summer. I chose the Navy, as their schooling and programs seemed the most appealing to me. I was going to sign up for being a hospital corpsman, but instead was offered to take an additional test to see if I qualified for the highest-level program for enlisted sailors. It was to be a Nuclear Engineer, and I passed. I was selected to be an Electrical Plant operator in the “Nuke” program, and after swearing in, I was off to Orlando, Florida for boot camp. 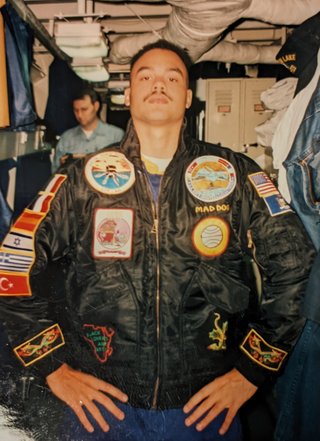 Q: Tell me about a couple of your most memorable experiences.

A: There are so many. Like getting kicked out of the Nuclear Engineer program on the last day (I failed the final) and then I became just a “regular” electrician for the Navy. That ended up being something that turned out for the best. I learned a ton as a shipboard electrician. I got to travel to many countries around the Mediterranean after sailing across the Atlantic. Once, I got to leap from an ocean going tugboat to the top of a submarine, then go down aboard so I could fix a generator while it was submerged. Or the time I was flown out to fix a generator for the USS Portland which was a “gator freighter”, a ship that carried lots of Marines. They had just pulled out of Operation Restore Hope in Somalia and seeing wounded Marines was something I can never forget. Or the time I accidently got my finger slammed in a closing submarine hatch while I was working in the middle of the night, and the only medic on duty was a Navy Seal and his team. Let’s just say his methods to fix my finger were brutal…but effective. I learned a lot about working in VERY High-pressure situations and maintaining focus and a cool head. I learned a lot about leadership and teamwork.

Q: Please describe your career in the civil service. (Why did you choose government service? When did you join OIG and at what capacity? How would you describe your job and its responsibilities? Are there any leaders who shaped your leadership skills?)

A: I joined OIG in January of 2020 as an IT Project Manager, which is still my role today in OCIO, within OMP. I chose civil service to get closer to helping make a difference in OIG’s mission, and for the stability the job offers to be able to do so. I had been a contractor for many years and having to move around every two years or so to reestablish yourself and start over was getting tiresome. I wanted to be able to stay somewhere and make a long-term positive impact. Now, I get to not only manage high impact IT projects for OIG that helps further the agency’s mission, but I’m also involved in the decision and evaluation process to help make the choices that hopefully best serve our “customers”, which is the rest of OIG at large.

Q: What advice would you give to young people who are considering government service?

A: I would ask them, “Are you ready to be the catalyst for the change that you envision? Are you ready to step out and lead, or at least actively participate in and support positive change?” Service is not a spectator sport. Be ready to listen and learn the lay of the land, but then get excited and active in how you can make the agency, and in turn the country, a better place. It also really helps if you choose an agency whose mission you’re excited and passionate about.

Q: What is your favorite aspect of working at OIG?

A: Besides being proud of the mission of our OIG in general, what I enjoy about working here is the fact that we are a small, tight knit team and I’m able to communicate with all levels of my management. Everyone here generally has an open door and is ready to discuss issues, new ideas, and just generally work together to solve problems at a moment’s notice. I’ve worked at small private companies that wouldn’t even do that.

Q: Was there anyone who inspired or motivated you to pursue what you’re doing now? Role model, teacher, relative, parents, coach, etc.

A: There was no greater role model in my life that inspired me in almost every way than my father. He grew up in the rural, segregated south and managed to get a Bachelor’s from SC State, serve in combat in the Army in WWII in the Pacific, get out and graduate with a Master’s from Penn State, and go on to have successful careers in education, law enforcement and community service. In even the toughest times, he always refused public (or private) assistance and believed in hard work and positive thinking. This all on top of just simply being a great dad who enjoyed spending time with his son.

Q: What are some of your hobbies and passions?

A: Being in IT, it’s not hard to imagine that I’m a computer and technology geek. Which also leads me into enjoying playing video games, many of which I play with my 5 sons, which I am told makes me a “cool dad”. I have been into martial arts since I was in grade school, and still train as part of my exercise routine. I love hiking, backpacking and white-water rapids rafting, particularly in more northern climates. Oh, and I love to talk cars, too. I own a muscle car that thankfully I don’t have to drive too much being a remote worker. Gas prices…ugh!

Q: Where do you see yourself in 5 years, 10 years? What are your future career goals?

A: In that time frame, probably still working for the government, likely still here at OIG. Professionally, as an IT project management professional, maybe run a Project Management Office one day. Oh, and is OIG going to open an office in Alaska in the future? Do they need help with that? I love it up there and need an excuse to “have no choice” but to move there.

Q: Is there anything you would like to add that hasn’t been covered?

A: Since this is about Veteran’s Day, I can add one thing. I know people love to say, “Thank you for your Service” as kind words of respect to former and active military members. There is nothing wrong with this, per se. But people should know, MANY people join the military because they don’t have many, if any, other options. Poverty, lack of access to good education and training opportunities, etc. I am not saying I am not proud of my service, nor that others aren’t as well. But keep in mind that there are VERY few wealthy people, or the children of wealthy people, that are in the enlisted ranks of the military. Some high schools in poorer neighborhoods get visited by more military recruiters than colleges. Far more. I am very grateful for being able to have the option of joining the military. I might have turned out very differently and not lived to see my 20s if that option wasn’t available. So just remember when you are thanking a service member for their service, you are probably thanking someone who did more than just serve their country; they likely overcame great personal hardships just to survive and become the great person you are standing in front of.