An official website of the United States government. Here's how you know > 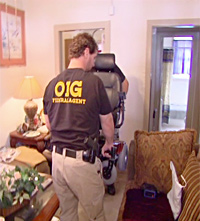 Improper payments, waste, and fraud - unfortunately, these problems are all too common in Medicare payments for power wheelchairs. To delve deeper into this matter, the Office of Inspector General (OIG) issued the series of reports examining Medicare wheelchair claims.

Based on these findings, OIG suggested a number of recommendations to the Centers for Medicare & Medicaid Services, such as:

The full reports with recommendations can be found here:

Other reports on power wheelchairs can be found on our website.

Beneficiaries are eligible to receive power wheelchairs under Medicare Part B coverage of durable medical equipment (DME). Beneficiaries who are prescribed power wheelchairs by their physicians receive them from DME suppliers, which bill Medicare for reimbursement. However, in order to meet Medicare guidelines, the prescribed power wheelchair must be deemed medically necessary based on a number of criteria including an algorithmic process, which determines that the power wheelchair will help the beneficiary perform Mobility-Related Activities of Daily Living and that a less expensive or different type of DME would not be appropriate. There must also be a face-to-face consultation with the prescribing physician. It is these and other standards that the latest report found were either not met or not sufficiently documented in more than half of the claims.

In addition to conducting evaluations and providing recommendations, OIG investigates and takes action against those who defraud the Medicare program. Recent power wheelchair enforcement cases include:

Let's start by choosing a topic

Stay up to date on the latest OIG news and opinions