HHS-OIG is full of employees who are dedicated to its mission of rooting out fraud, waste, and abuse in federal health care programs, and Jim Korn, the Denver-based Regional Inspector General for Audit Services, is no exception. As a seasoned auditor with OIG, Jim is motivated daily by his ability to advance the public interest through conducting OIG audits.

As a college student at the University of Colorado Boulder, Jim remembers being fascinated by the element of discovery in his biology courses. But he did not want to spend all day looking at a microscope. He wondered, what type of career would allow him to satisfy his curiosity and love of discovery while promising wide-ranging opportunities and stability to support a family?

Something clicked in his business classes. In his own words, Jim realized that accounting was the “backbone” of every business. And not only did accountants have job opportunities practically everywhere; they also did exactly what he loved: "getting to the bottom of things.” It was a perfect fit.

After finishing his B.S. in Business (with a concentration in Accounting) at Metropolitan State University of Denver in 1990, Jim began working as an auditor at Blue Cross and Blue Shield of Colorado, a fiscal intermediary that did Medicare cost report provider audits. Then, in 2002, he came across an opportunity with HHS-OIG as a Senior Auditor in his hometown of Denver and decided to apply.

Since joining OIG, Jim has been able to continue and expand on his earlier work on Medicare and Medicaid. He has found great interpersonal relationships with his coworkers, challenging portfolios that covered a wide variety of issues, and a satisfaction for his ever-persistent curiosity. And he is motivated every day by the knowledge that he is protecting the health and welfare of the millions of beneficiaries of HHS programs. 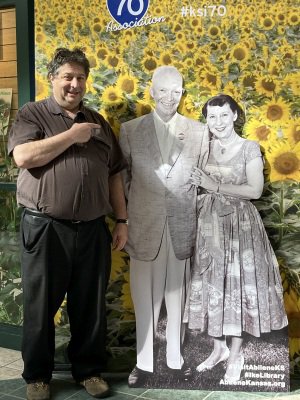 In addition to the strong interpersonal relationships and mission-driven work, Jim has found additional perks of being an HHS-OIG auditor. As a self-proclaimed “history buff,” Jim has been able to explore historical sites in his time off, while traveling to conduct audits. Jim noted a particularly memorable visit to Philadelphia, where he got to tour Betsy Ross’s house (which was particularly notable for someone who does upholstery in his spare time!).

Jim also notes that OIG’s mission resonates with his Jewish identity, particularly the precepts of the ancient religious leader and sage, Hillel. Hillel famously summarized Torah, and the Jewish religion, as based around one key principle: “That which is hateful to you, do not do to your fellow.” Jim says that this rule, much like the Golden Rule, has always had an impact on his worldview, but has come into particular focus in his role as a Regional Inspector General for Audit Services.

This precept directly applies to Jim’s work ensuring quality of care in nursing homes, particularly through OIG’s audits of skilled nursing facilities (SNF). Jim and his team are currently planning an audit that will investigate ownership interests of SNF and evaluate where funds end up, all of which impacts the quality of care for patients.

Jim’s upcoming audit builds on OIG’s extensive oversight of nursing home facilities. Over 1.4 million individuals live in over 15,500 Medicare- and Medicaid-certified nursing homes across the nation, and HHS-OIG works to ensure that those beneficiaries are receiving safe, high-quality care. Most nursing homes in the United States are certified to serve as SNFs, which provide a clinically managed recovery period after a person's illness or injury. Unfortunately, previous OIG audits, evaluations, and investigations have raised concerns about the quality of nursing home care, many of which have been exacerbated by the COVID-19 pandemic. The audit of SNF ownership interests that Jim and his team are planning would play a critical role in HHS-OIG’s oversight of nursing home facilities.

“I’m in a really unique position to be a custodian of taxpayer funds and make sure they’re spent effectively and efficiently,” Jim says. “And for folks who are in the greatest need, I can have some influence in helping them get proper health care.”